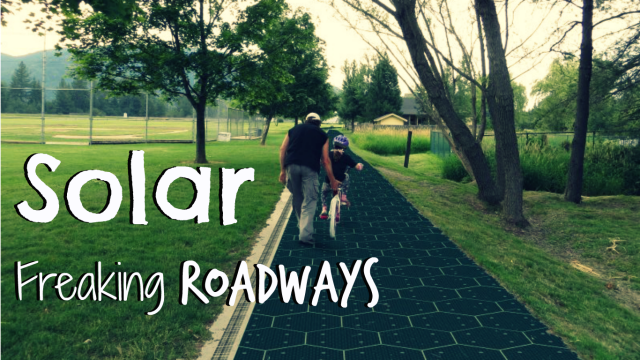 Yippie solar freaking roads now I need not pay the Road Tax for this green technology
Solar Roadways the next technology marvel has making rows among technology lovers and economists as the smart technology quickly went viral in capturing everyone's attention and generating whooping 1.6 million plus dollars in crowd funding and breaking several records as a technology startup from Sandpoint, Idaho by lovely engineering couples Scott and Julie Brusaw found in 2006. The technology invention uses solar panels in a innovative way into converting them into durable hexagonal panels that can be arranged together to make road platforms which can be programmed further to make amazing digitized roads which are responsive to vehicles and commuters including wild animals and any unexpected natural or man made accidents making them safer than ever in generating helplines and providing necessary clearance quickly thanks to connected and programmed solar panels.Let's have a look at how these solar freaking roadways work and what made it become a viral technology and would create several job openings and services.

First a Fall what is Solar Roadways? 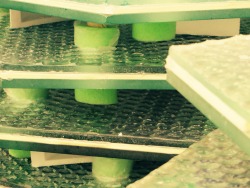 Stacked Solar Panels
Solar Roadways is technology that replaces all roadways, parking lots, sidewalks, drive thrus, pavements and all recreational services with smart and durable solar panels which are microprocessors build and designed in hexagonal structures replacing the boring concrete roads and pavements which require frequent maintenance and capital. These solar panels are intelligent and consist of a durable three layered membrane of durable road glass, electronic layer and base plate layer which are very easy to replace and install and most of all they generate money for themselves in form electricity which turn is used as capital surpassing  the energy requirements by several folds of any country or state bringing energy cost drastically down getting electrical vehicles and equipments as the next popular mode of transportation and travel.

So what made this Solar Roadway Technology viral ? 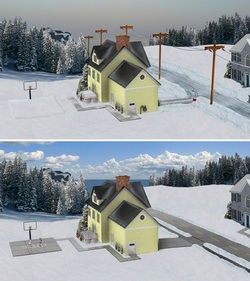 Snow roads now not a problem!
Basically being solar powered and programmable these solar roadways become solution to many things that one can't even imagine for example climate where in these solar panels automatically clear away snowy roads and alert any disturbances on the road like a debris or something unexpected on the road like the animals or collisions saving you on cleaning roads and providing you a easy delay proof pathway to your destination as these glass panels comes with led lights which can be programmed to make road signs and can also be used in a similar way for recreational platforms where in a single field can be converted into various other gaming platforms instantly. Just imagine converting your lawn into a basketball court or a parking spot or whatever you can imagine as these not only serve as roadways but also as a cool household gadget to install once and use it forever .Moreover bigger organizations like Airports will have safer and more accurate visibility and functioning. Just install these solar panels and program it with your desired configuration, hmm a life size chess or Harry potter quidditch games! sounds cool just imagine the Tron world coming live in your city ! :D. Also being pressure sensors they can detect and alert any objects that might or may come in contact with an accident using text and colored signals. 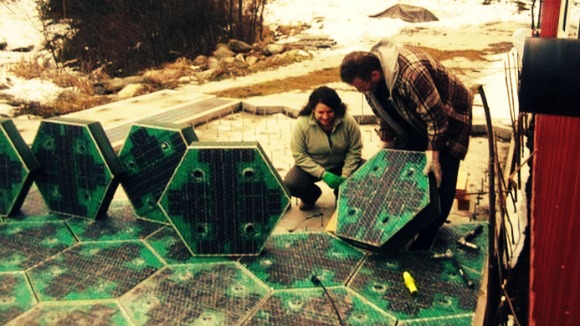 Scott and Julie Brusaw installing the solar roadway panels on their garage floor on a snowy afternoon
When I said these solar roadways produce clean green energy did I say they are also eco friendly in the sense that these solar roadways are created from recyclable materials and also these solar roadways come with a side chamber for cables consisting of power lines to households, internet cables, telephone fibers etc which will replace the traditional hanging wires and standing tall poles which get shut down quite easily in harsh climates causing outages in several services. These side chambers also serve as flood channels making roads stand out even during rains and floods.
Finally we have the technology prototype which can convert and harness solar energy and function like mother nature without having to destroy it for our needs. Surely we can't harness the entire planet's surface with these solar panels but just imagine putting the road to use which simply sits there giving us directions and doing nothing. To make the society a better place and to support the ideas we believe in support this amazing solar technology for the betterment of both mankind, mother nature and animal world.